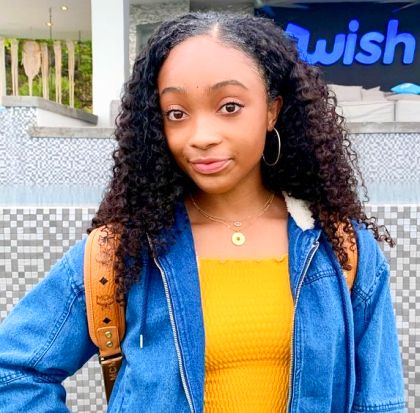 Sanai Victoria Cunningham is her full name and her nickname is Sanai. Sanai Victoria’s birthdate is Jan 15, 2007, and her birthplace is Beverly Hills, California.

Sanai Victoria Parents & Family: Actress Sanai was born & raised in California with her family. Sanai Victoria’s mother’s name is Tanesia, and her father’s name was not found. Her sibling’s & others’ relative details info under review.

Sanai is a 15-year-old American actress who began her career when she was seven years old. She can currently be seen in Disney+’s Diary of a Future President as Melissa and Netflix’s No-Good Nick as Tamika.

She began piano, gymnastics, voice, and dance lessons at the age of two and has continued to excel in the performing arts.

Sanai began competing in natural pageants at the age of six and quickly excelled, winning several Miss California titles up to the age of eleven.

Soon after, Sanai decided to try her luck in the acting industry. She quickly began booking numerous national commercials.

Booking the very first audition she attended. Within a year of beginning her acting career, Nickelodeon recognized Sanai’s talent and cast her in the Nickelodeon pilot Future Shock, where she starred as Kylie Parker, a tenacious, wise-beyond-her-years 8-year-old.

Comedy has come naturally to this bright, charismatic young actress, who has appeared as Vera on ABC’s Modern Family and Cousin Diamond on Black-ish over the years.

She has also appeared as a guest star on several Disney shows, including Sydney to the Max, Lab Rats Elite Force, Girl Meets World, and Bizaardvark.

She was nominated for and received a Young Artist Award for her role as Zoe in Lab Rats Elite Force. Sanai had the pleasure of working as a series regular on “The Payne’s,” which aired on the OWN Network, at the age of nine.

Her voice can be heard as a series regular in animated projects such as Tessa on Little People by Fisher-Price on Sprout and Disney’s Whisker Haven Tales with the Palace Pets, as Treasure, on Disney Junior.

In addition to recurring on Vampirina as Phoebe on Disney Junior & Madagascar: A Little Wild as Claire on Hulu.
Sanai enjoys exploring theatrical and dramatic acting in addition to her obvious comedic instincts.

She has always been mentally mature for her age and enjoys bringing true stories to life on the big screen.

She made her television debut as Victoria Whitney in Lifetime’s remake of the classic Beaches, alongside Idina Menzel and Nia Long.

Sanai also appears as Lola in Summering, an independent film directed and produced by James Ponsoldt.
Sanai is a straight A honor roll student who is enrolled in Advanced Placement (AP) college courses when she is not working.

She’s a cheerleader who enjoys spending time with her four-legged best friend Sasha Fierce. She enjoys donating to charities and is currently working on establishing her own nonprofit to assist foster children and the mentally ill. Tanesia Tramell of Eleven 7 Artist Management and A3 Artist Agency represents her.

How old is Sanai Victoria? What is the Sanai actress’s Age, Height, Weight & Body Measurement? Check out below.

Let’s examine Sanai Victoria’s income, compensation, and other financial details. In 2022, how rich is actress Sanai, and how rich will she be in 2023?
The actress Victoria’s net worth, properties, cars, and mortgages were all unknown. Her primary sources of income include modeling, acting, and producing.

Numerous magazine blogs and social media sites estimate Sanai’s net worth to be between $1 – $1.5 million USD in 2022. Her overall net worth will surpass $2 million USD [approximately] in 2023.

TikTok – Sanai Victoria Tiktok Username is (@sanaivictoria). She is a professional TikToker & currently she has 26.1K Followers on her TikTok profile.

Sanai Victoria On The Summering

Sanai leads a  role as Lola in the film “Summering.” This is a drama genre film directed by James Ponsoldt, with the top cast members being Lia/Sanai/Madalen Mills. Summering will be released on August 12, 2022.

Plot – Four girls grapple with the harsh realities of growing up and embark on a mysterious adventure during their final days of summer and childhood, the weekend before middle school begins.